Feeling much, much better. Totally back to normal. Getting to bed early (even if I don’t sleep very well through the night) has made a big difference in how quickly I heal and how well I feel during the day. Baby girl has had a cold, so it’s kind of like sleeping with a sniveling piglet who bonks me over the head with her sippy cup in the middle of the night and randomly whines in her sleep… “But I toldddddd Mommy I wanted some grapesssss. She faileddddddd meeeeeee.” Not really a prime sleep environment. Plus, considering that I’m still recovering from that last flare, I haven’t had high expectations for my energy levels during the day. But they’ve been really strong. Cleaned the whole house on Wednesday (after being sick for so long, it was disgusting!), got baby girl off to school Thursday and wore her out at the playground later in the afternoon, and so far today, I’ve made a big batch of lamb/veal/grass-fed beef patties to freeze, along with making breakfast for the family. Don’t know what the afternoon will have in store for us, but I don’t expect I’ll need a nap.

Now that I can eat again, here’s what I’ve been eating…

Made an organic (but not grass-fed) beef pot roast on Wednesday. Lots of carrots, onions, celery, garlic, herbs, and some chopped bacon for extra fat and flavor. Served it topped with homemade kraut, or on a bed of mashed cauliflower. Or on a bed of cauliflower topped with kraut… 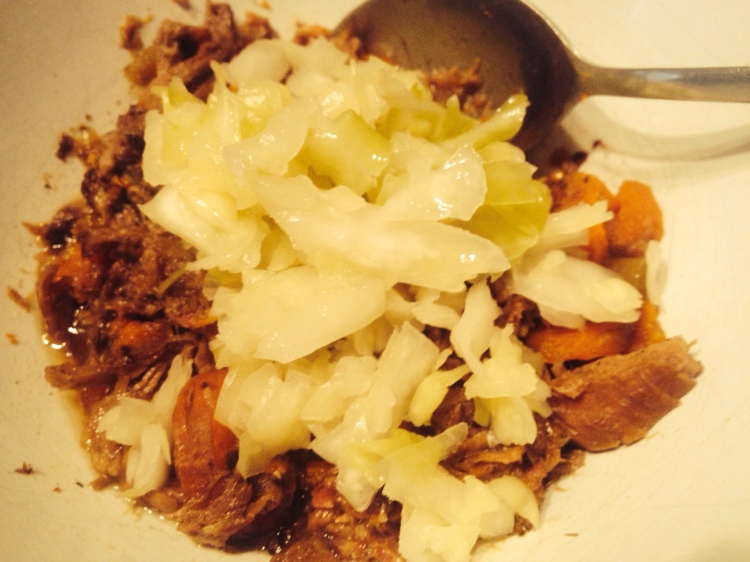 One thing I’ve been suffering from is lack of convenient, portable, AIP compliant snack foods. I love Larabars, but no nuts on AIP makes them a no-go for now. So I made a variation using unsweetened dried coconut and dried figs. Had to add a bit of cinnamon and honey for flavor, but they turned out great. Blended everything up in the food processor, then mashed into the bottom of a small plastic container to form them into bars. Wrapped in snack size zip-lock bags, and done! Portable snack. AIP friendly. 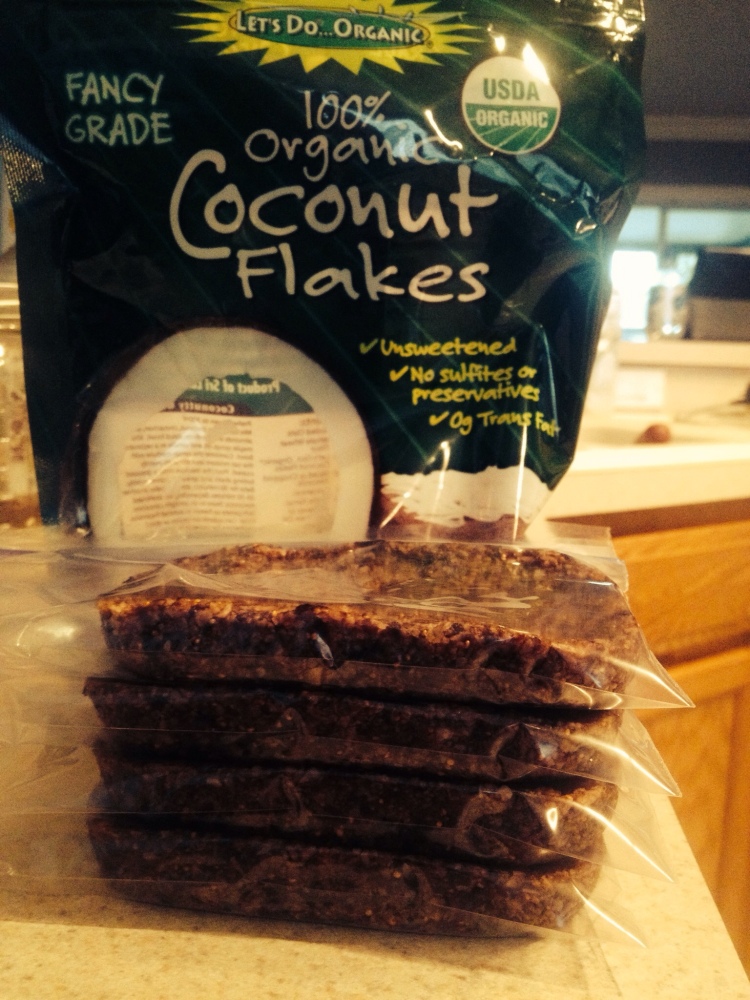 And for breakfast this morning, I made sweet potato “nests” topped with an egg for my husband and daughter. No eggs for me on AIP, so I just had an eggless nest with raw kraut and 2 of the delicious lamb/veal/grass-fed beef patties I’d just made. (Sorry, ate half a patty before remembering to take a pic.) That stuff floating around on top of my orange juice is fermented cod liver oil- one of the few supplements I’m taking these days. It sounds disgusting (and it is if you try to take it straight), but mixed in some juice, you can hardly tell it’s there. My 3-year-old drinks it like this with no problem. 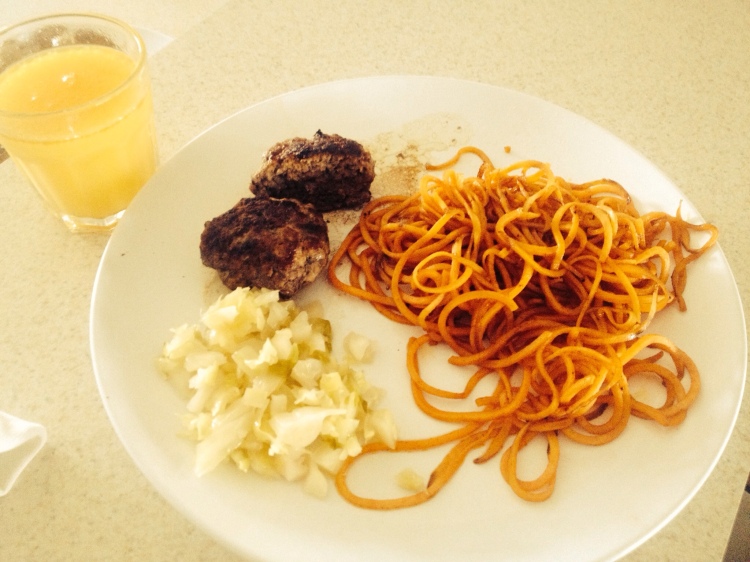 Ok. Confession time. Wednesday was my first day eating solid food after nearly a week of liquids (see previous post). My mouth was still hurting, and no matter what I ate I still felt hungry. I think my blood sugar was out of whack after not eating for so long. I’d been walking past my daughter’s bucket of Halloween candy daily, with no desire to eat any of that processed, fake, GMO-laden, glutenized, unnaturally colored and preserved, poisonous junk. But something happened on Wednesday. Something changed. I had to have it. I was like a junkie. Hiding from my kid, hunkered down next to the garbage can in the kitchen. 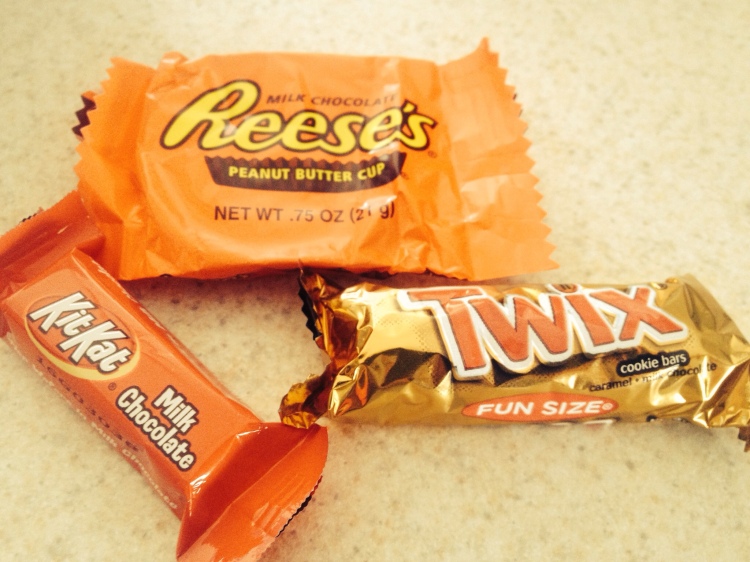 I ate four pieces. The ones pictured above, plus a snack sized bag of skittles. Well, not the ACTUAL ones pictured above. At the time, there was no thought of picture-taking or blogging. In fact, I was more concerned with hiding the evidence. From who? I don’t know. But understand, I view this stuff as poison and honestly believe that it heavily contributes to the disease I am fighting. But I could. not. stop. myself.

It’s now been two days, and I haven’t had any immediate reactions. Though I don’t know how it might affect my long-term healing (gluten exposure can take months to get out of your system). At any rate, this reinforced the importance of blood sugar regulation to control cravings. And reminded me that “if it’s in the house, I WILL eat it.” It’s not a matter of willpower. It’s a matter of setting yourself up for success. That candy would not normally have been tempting for me, but given the unique combination of factors that were beyond my control, I was left with an insatiable craving for sugar, calories, and fat that was impossible to deny in that moment.

So now, I move on. I wish I hadn’t eaten that crap, but I understand why I did. And I’m grateful there were no immediately noticeable consequences. And now the candy is put away in an inaccessible spot where we will all probably forget about it until next Halloween. At which point it will still be perfectly fresh. Ugh! That’s disgusting. 😉

7 thoughts on “Recovering! (and a confession)”