Gotta get my juice in for the day. Craving green. I love that I crave this now. I really had to force myself when I first started juicing. I only truly enjoyed the juices that were mostly fruit. If it wasn’t sweet, it didn’t taste good. Now, one apple in the midst of a bunch of veggies is plenty sweet. 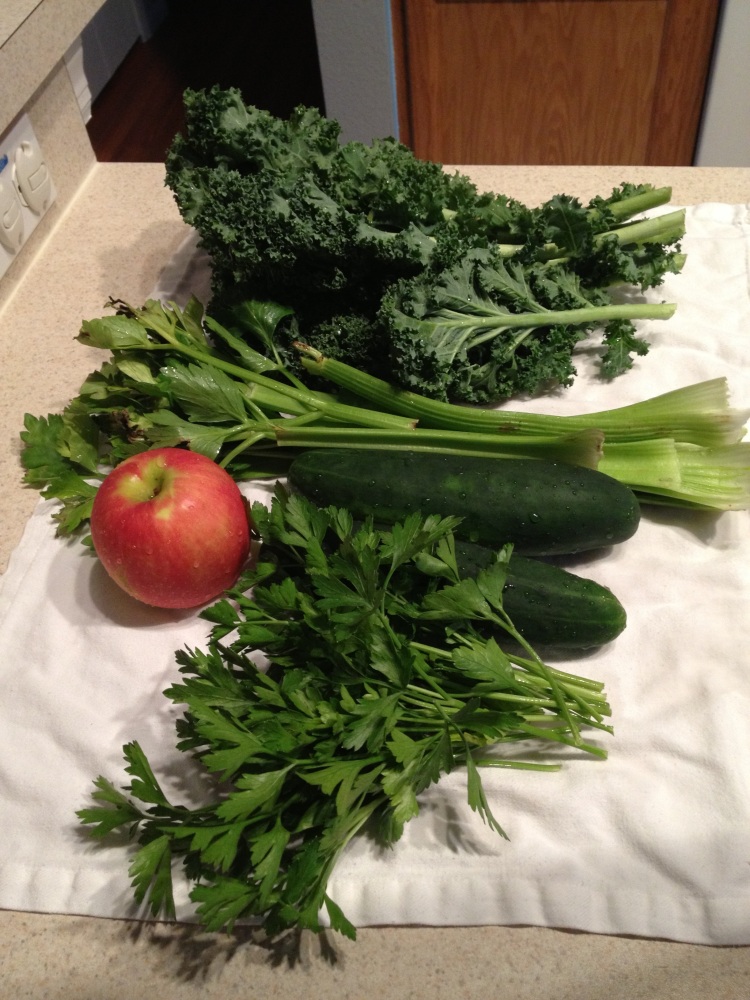 And I really crave that fresh, crisp… I don’t know… greenness.

I do feel like juicing is quite wasteful. Ideally, we’d eat all those veggies. And we should. As much as possible. By juicing, we’re missing out on a lot of fiber and who knows what else that is available to our bodies when we eat the WHOLE food. God made that stuff for us- to nourish us and give us the energy and focus to do His will. We may be missing out a bit by juicing.

But this is how I look at it: I don’t really like most vegetables in their raw state, and I know a lot of nutrients/minerals can be lost or altered during the cooking process. So by juicing, I’m getting access to that good stuff I wouldn’t otherwise eat very often. I also believe that juicing is imperative for sick people. Not just for people (like me) whose illness involves their mouths and therefore their physical ability to eat, but for anyone whose body needs quick and easy access to concentrated nutrition. Sick bodies have hard work to do to get back to health. Giving the body the fuel it needs in a form that will be most easily digested conserves energy that can be focused on healing.

Speaking of things that are easily digested, lentils are the most easily digested of all the legumes. And they were the main ingredient for our dinner tonight. I adapted Rachel Ray’s Lentil Soup with Sausage and Kale. It was a super easy adaptation. Just omitted the sausage and substituted veggie broth for chicken broth. Here’s a pic of the beginning stages:

In the pot at this point: olive oil, onions, garlic, purple potatoes, carrots, rosemary (from the garden), bay leaves, and a dash of nutmeg. The house was smelling fantastic. Then I added a can of no sodium added tomatoes, 6 cups of organic vegetable broth, chopped kale, and the lentils. 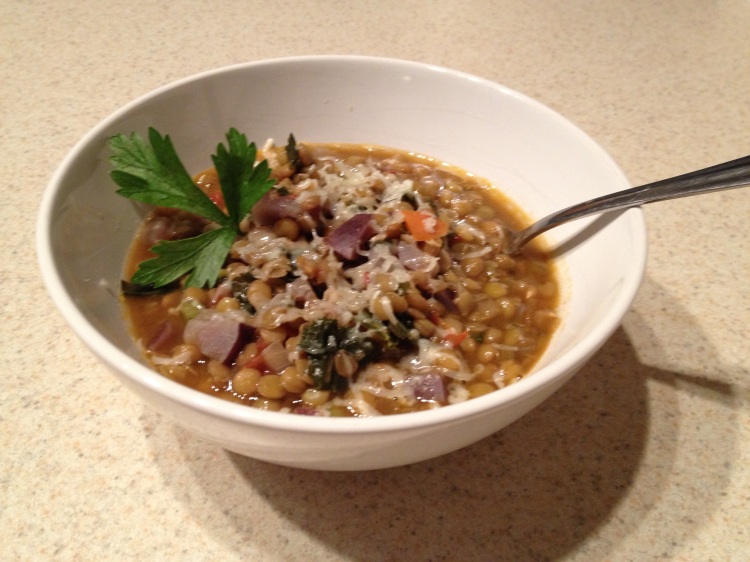 And that’s the finished product. I shredded a smidge of sharp cheddar cheese on top. This meal definitely passed the picky husband test. When he first looked in the pot, he sarcastically said, “Yum….looks so good…” His favorite meals are pizza, beans and rice served with a humongous pork chop, steak and potatoes, and he loves seafood. But if the meal doesn’t include a significant portion of animal protein, he’s not going to be excited about it. But he wolfed down his large bowl of soup and said it was really good. As I stood over him and shredded cheese into his soup, he said, “I feel like I’m at Olive Garden.” I think his tastes may be slowly changing over time, too. And that’s a really good thing, because I need him to be here and be healthy for a long, long time.